Manama [Bahrain], May 26 (ANI): Air India Express flight with 179 passengers on board has departed from Bahrain International Airport, according to Indian Embassy in Bahrain.
"Air India Express Flight IX 1376 Bahrain-Kozhikode departed from Bahrain International Airport with 179 passengers, including 2 infants, 21 Pregnant Ladies on board. #VandeBharathMission," tweeted Embassy of India, Bahrain along with a video.
Earlier, the Embassy had tweeted to inform that special Air India Express flight IX 1376 Bahrain-Kozhikode has reached Bahrain International Airport as a part of Vande Bharat Mission.
Meanwhile, Indian Embassy in France, tweeted several pictures and said: "Paris CDG Airport brims with excitement as stranded Indians arrive to avail the first repatriation flight from Paris-Ahmedabad via Del #VandeBharatMission." 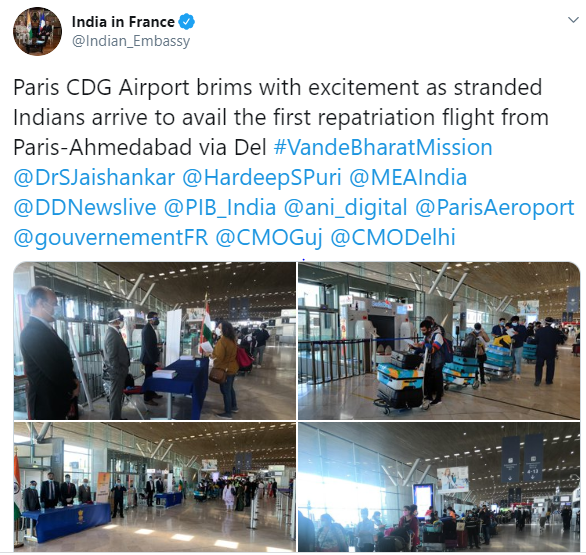 The central government launched the first phase of the Vande Bharat Mission on May 7 to evacuate Indians stranded abroad due to coronavirus induced lockdown. The second phase started on May 16.
External Affairs Minister (MEA) S Jaishankar on Tuesday conducted a review meeting of Vande Bharat Mission with the aim to ramp up the scale of the repatriation exercise and enhance its efficiency.
"Just concluded a detailed review meeting of Vande Bharat Mission. Thank Team MEA, Ministry of Civil Aviation, DMA, Air India, MHA, Bureau of Immigration for their participation and contribution. The focus of the meeting was to ramp up the scale of VBM and enhance its efficiency," S Jaishankar wrote on Twitter. (ANI)

Islamabad [Pakistan], July 8 (ANI): Pakistan has recorded as many as 2980 new cases of coronavirus in the last 24 hours taking the tally to 237,489 while the testing for the lethal virus has been reduced for the 18th consecutive day.

WHO team to visit Beijing to trace origin of COVID-19: China

Kazakhstan has resources to win against coronavirus pandemic